The World Transformation Movement Switzerland Centre was established by Christoph and Birthe Zehntner in appreciation of biologist Jeremy Griffith’s scientific explanation of the human condition, and its absolutely astonishing ability to bring clarifying insight to every problem on this planet—see HumanCondition.com. It joins the global network of support that is sweeping the world!

Speaking of their motivation to establish a Centre in Switzerland, Christoph has said: “Finally we can understand how we developed as a species and why there are so many problems on Earth—and how they can be solved and eliminated by reconciling ourselves with our instinct/soul! So it’s an honour for us to be able to open a Swiss Center and to start discussions with our people in Switzerland—because IF EVERYBODY KNOWS ABOUT THIS SCIENTIFIC BREAKTHROUGH, ALL PROBLEMS ARE SOLVED. EVERYBODY BECOMES FREE!!”

Christoph Zehntner, MSc, is an electrical engineer who graduated from ETH Zurich, one of the world’s leading universities. He worked for the Science and Technology division of The Federal Office for Defence Procurement (armasuisse), as head of Aeronautics and Electronics. Christoph speaks German, French, English, Danish, Spanish, and a little Italian. Birthe Zehntner was born and raised in Denmark. She has worked as a Medical Lab Technician in Denmark and Switzerland, and later became a Breastfeeding Counselor and Lactation Consultant (IBCLC-qualified). Birthe is also a graduate of the Institute of Integrative Nutrition (IIN). Christoph and Birthe have three children and four grandchildren, and reside near Bern.

Download this transcript as an A4 or US Letter PDF

Birthe Zehntner: Hi, I’m Birthe. I was born and grew up in Denmark and was educated as a medical lab technician in Denmark.

Christoph: It’s a great opportunity, and a pleasure for us to be able to open a Swiss Centre; we want to have discussions with our people in Switzerland.

This is the book, FREEDOM: The End Of The Human Condition, from Jeremy Griffith. If everybody reads this book, all problems are solved; everybody gets free—you can’t help it! If nobody has any problems, then the world has no problems!

I started looking at the videos on the website [www.humancondition.com] and I got hooked. I found out that there is a lot of knowledge there; there is a huge amount of information on the website; and I soon found out that what it presents is true. And so as a result I found Jeremy’s book FREEDOM and I bought it, and I just began to read it and I nearly couldn’t stop! It’s very thrilling. It’s fascinating how simple and easy it is. Of course, you have to ‘get it’, but once you have it, it’s really amazing.

When I read FREEDOM I found out that all issues are actually solved—yes, really, really! You just read and find out that Jeremy’s always talking about you, and you get answers without asking! So it’s really fascinating! And what also fascinates me very much is all the links Jeremy makes; he understands so much of everything, and he can link it together. It’s absolutely consistent in everything. I made so many notes in the book that Birthe didn’t want to read my book, so we bought another one—she needs her own! [laughter]

Birthe: He nearly never stopped, he was always reading [and saying], ‘Oh, this is so good and so interesting!’ He was totally absorbed. It has really changed him; yes, for us, since he’s read FREEDOM he has somehow come to peace with himself. And that’s what everyone in the family feels too. So yes, I think he’s more insightful now! [laughter] He has realised that [insightful peace] now, or is living that [insightful peace] now, I think.

Of course, I have also read a lot of books and I think the book from Jeremy Griffith on the human condition is kind of the frosting on the cake. It’s kind of a culmination of all that I have learned until now.

Christoph: I think Jeremy deserves a Nobel prize, and I would say there should be three Nobel prizes given to him, because it would be a wake-up call for the whole world when they see a person getting three Nobel prizes! So the first prize is the Peace prize, of course, because it’s clear that the world will be at peace after all humans have become free of the human condition. And the next prize is the prize in physiology or medicine, because Jeremy has shown how the human species developed from our ape ancestors and how consciousness came to man. The third prize is for physics, because Jeremy has shown how the development of the order of matter corresponds to Negative Entropy; and how it means Integrative Meaning is actually the concept of ‘God’. And so Jeremy makes a bridge between physics and religions. So it is really worthwhile to award him with these prizes.

“It’s time to climb the mountains of our minds.”

From WTM Patron and world-renowned mountaineer Tim Macartney-Snape’s summit speech after his solo ascent of Mt Everest in 1990. The ability Jeremy Griffith has now given us to understand the dark side of ourselves means we can finally achieve the ‘wholeness for humans’ that the great Swiss analytical psychologist Carl Jung was forever pointing out ‘depends on the ability to own our own shadow’.

MUST, MUST WATCH: Craig Conway, the acclaimed British actor, writer, producer and broadcaster — and the founder of WTM North East England Centre — has brought all his skills to bear to produce the ideal introduction to Jeremy Griffith’s explanation of the human condition in this absolutely astonishing, world-changing and world-saving interview with Jeremy. It’s called ‘THE’ Interview because in it Jeremy gives such a concise and accessible summary of his world-saving explanation of the human condition that it’s nothing less than the most important interview of all time! 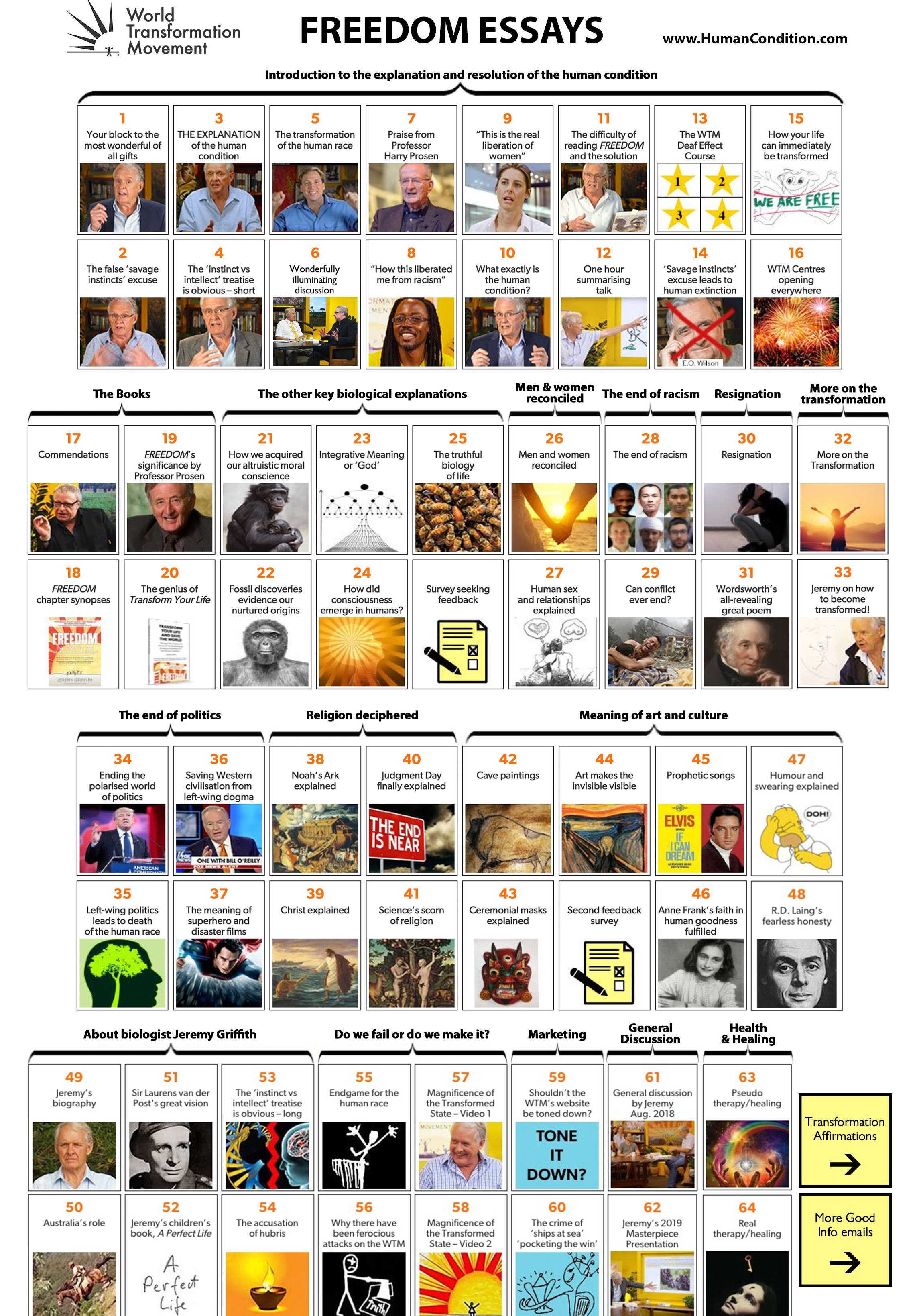 This series was developed to help people access the fabulous new transformed world that opens up for all humans now that understanding of the human condition has been found. As these essays cover all the main subjects in FREEDOM: The End Of The Human Condition, they provide an easy way to read FREEDOM in wonderfully illustrated bite-sized portions. The first 4 essays are particularly important and helpful, and are the key to understanding and solving everything!

The full Freedom Essay Series is available in English on the main WTM website at HumanCondition.com.

The German and French translations of some essays are available on the other language versions of this page.

Alongside the original WTM Centre in Sydney, Australia, World Transformation Movement Centres are being established around the world to help bring to everyone the now desperately needed all-relieving and all-explaining biological understanding of the underlying issue in all of human life of our troubled human condition.

Visit the WTM’s Transformation page to learn more about the formation of these Centres. You can access the following examples of WTM Centre websites by clicking on their images below.

Subscribe to our YouTube channel and receive two or more videos each week. These videos will include enthralling, bite-sized samples of the explanation of the human condition, and also descriptions and examples of the transformation that is now possible for all our lives.